According to a recent Yippee 2021 study, the COVID-19 year increased reading among children and young people. The most popular readings are comics and especially Aku Ankka (Donald Duck), which is the number one magazine in the survey with almost 290,000 readers. Aku Ankka pocketbooks are the second most popular. Koululainen magazine, Aku Ankka Junior and HS Lasten uutiset (Children's News) almost tied for third place. 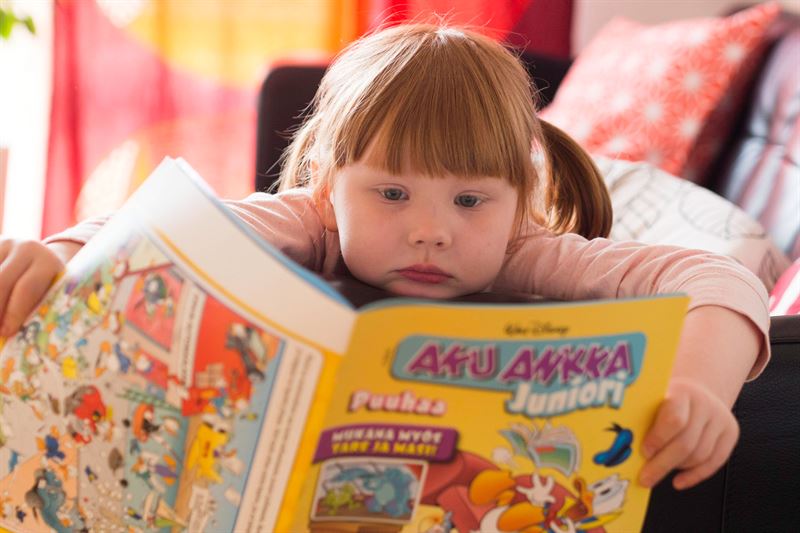 The recent Yippee 2021 study on children's media use shows a positive development in Finnish children's reading. According to the study, the COVID-19 year increased reading among children and young people. Children say they have spent more time with their parents over the past year, which is likely to have increased the common reading time of children and parents.

The TNS Kantar study commissioned by Sanoma examined the media use of children aged 3–16. The study shows clear differences in the daily media use by age group. For ages 3 to 7, TV and video are the top media used at all times of the day, while for young people aged between 13 and 16, social media, music, and videos are the most popular. Reading books is in the top three for girls during evening hours.

Comic magazines are still have a strong footing in the media days of primary school children. Celebrating its 70th anniversary this year, Aku Ankka magazine is the number one magazine in the survey with almost 290,000 readers. The number of readers has remained at the same level as in 2019. Central to literacy skills is that the magazine inspires boys in particular to read.

"It's amazing to see that, based on the last two studies, it would seem that children and young people are starting to read more. The role of the Aku Ankka magazine as the first step in reading is extremely important, I am extremely proud of every Finn who has learned to read with our magazine! The long history that dates back to 1951 literally obliges us to deliver a fun and multi-level comic book that will delight both young and adult readers. It’s great to see how new generations find the magazine and learn to read with it. According to our studies, readers are really satisfied with the content. It is wonderful to see that the number of readers who like the magazine has increased," says Aki Hyyppä, Editor-in-chief of Aku Ankka.

The popularity of Aku Ankka pocketbooks has grown over the past two years and now reaches 230,000. It is the second most popular of all the children's and young people's magazines in the survey. Koululainen magazine, Aku Ankka Junior and HS Lasten uutiset (Children's News) almost tied for third place, each reaching 216,000–217,000 readers among readers aged 3–16.

Changes in the media use of children and young people reflect the trend as among the adult population. The increase in the need for information is reflected in the rapid growth in the number of readers of HS Lasten uutiset. Launched in August last year, this children's news newspaper already has more than 20,000 subscribers and the magazine is subscribed to in 92 per cent of Finnish municipalities.

"It has been great to see how the new newspaper has been received by children across Finland. We launched the magazine as we wanted to inspire children to read. After all, children are curious and think a lot about both big issues and small questions. Therefore, from their point of view, it is interesting to read stories about the world around us. In addition to reading, it is significant that children become part of society and their own voices are also heard. We want to support the development of children's thinking and agency," says Anu Ubaud, Editor-in-Chief of Helsingin Sanomat.

The decline in literacy among children and especially among boys has raised concerns not only among vocational educators but also parents. Sanoma's research on consumer media motives shows that parents of young children in particular are concerned about increasing screen time. In addition to success at school, the knowledge about the positive effects of literacy skills on the well-being of children and young people is growing. Also, reading habits and interest in reading are essential. Good content and stories are still key factors.

According to the Yippee 2021 study, about a quarter of 7–16-year-olds read books and comics at least weekly. Approximately the same number of readers of books or comics say that they concentrate on what they read. Nearly half of the readers read books, preferably printed books, but the popularity has declined. The audiobook option was now included in the survey and it was chosen by 16 per cent of the readers. It exactly the same amount by which the popularity of printed books has declined.

The Yippee 2021 study includes many aspects related to the life of children and young people. The study examined the number of readers of some magazines as well as the number of users of selected websites, TV channels and services. One important section was the children’s and young people’s relationship to reading books and comics, such as Aku Ankka.

The target group of the study was children and young people aged 3–16 years. The survey was conducted using an online form and respondents for survey were recruited from the Kantar Forum online panel. The youngest children responded to the survey together with their parents. All respondents were allowed to get help from their parents when answering. There were 1,041 respondents in the study (target 1,000).

In addition to the overall level, the results are mainly examined by gender and three age groups. The results are compared with previous years' Yippee studies, as applicable.

Children and young people read more during the COVID-19 year – Aku Ankka still the most popular read
The recent Yippee 2021 study on children's media use shows a positive development in Finnish children's reading. According to the study, the COVID-19 year increased reading among children and young people. Children say they have spent more time with their parents over the past year, which is likely to have increased the common reading time of children and parents.